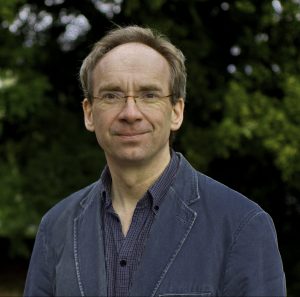 In September 2008, the choir were delighted that James Gilchrist agreed to become President of the Society.

James began his working life as a doctor, turning to a full-time career in music in 1996. His international career has included concert appearances at the Proms (most recently in Haydn’s The Seasons), with the Monteverdi Choir and Orchestra in their celebrated Bach Pilgrimage with Sir John Eliot Gardiner in Europe and America, and with many of Europe’s specialist ensembles and distinguished conductors.

As a recitalist, James frequently works in partnership with the pianist Anna Tilbrook, and has performed Schumann Liederkreis, Finzi Till Earth Outwears and Poulenc Metamorphoses for BBC Radio 3. James is also partnered regularly by the harpist Alison Nicholls and recently appeared in recital with the Nash Ensemble at the Wigmore Hall, and at the Bury St Edmunds Festival in a programme featuring a new commission by Alec Roth based on Vikram Seth’s All You Who Sleep Tonight.Operatic performances include Quint in Britten’s Turn of the Screw, Ferrando in Cosi Fan Tutte, Scaramuccio in Strauss’ Ariadne Auf Naxos (Richard Hickox), Gomatz in Mozart’s Zaide (Istanbul), Vaughan Williams’ Sir John in Love (Barbican/Radio 3), Hyllus in Handel’s Hercules (Berlin), Acis & Galatea at the Berlin Staatsoper, Evandre in Gluck’s Alceste at La Monnaie in Brussels and Purcell’s King Arthur for Mark Morris at English National Opera.

Recent engagements have included On Wenlock Edge with the BBC National Orchestra of Wales, Bach Concerts on tour with the Monteverdi Choir & Orchestra, Creation at the Frauenkirche, Dresden and at Westminster Cathedral for the Bach Choir, Mass in B Minor at Wells Cathedral, Lechmere Owen Wingrave (concert) for CLS at Cadogan Hall, Pulcinella for Radio Svizzera in Lugano, St Matthew Passion at the Royal Festival Hall and Ugone Flavio for the Academy of Ancient Music in Birmingham and London.