For Charlton Kings Choral Society’s long-awaited first public concert after the enforced break caused by the coronavirus pandemic, a programme music from the Baroque was chosen:

Soloists were: Hannah Grove, soprano (valiantly and brilliantly standing in at the last minute for Hannah Davey who was indisposed); Victoria Jess, mezzo soprano; Steve Lee, trumpet; Victoria Brawn, oboe; and father and son duo Laurence and Elliott Kempton, violin. Accompaniment was, as ever, provided by the wonderful Regency Sinfonia.

The concert was held in the recently refurbished St Philip and St James’ Church in Leckhampton, which is also the new rehearsal venue for the CKCS. The elegant and spacious surroundings greatly contributed to the atmosphere of the evening and were much appreciated by audience and performers alike.

The first half of this concert at Cheltenham’s Pittville Pump Room was devoted to Holst, with the centrepiece being a newly rediscovered early work for choir and orchestra by the composer. Clear and Cool sets The Song of the River from Charles Kingsley’s The Water Babies. Speaking at the start of the concert, Chris Cope, Chairman of the Holst Society, said that this piece had been performed previously just once, by Hammersmith Socialist Choir in 1897. On that occasion, though, it was to piano accompaniment. Charlton Kings Choral Society’s conductor John Wright had edited the work, arranging it to reduce the size of orchestra required. The performance with orchestra by CKCS could therefore be deemed to be a world premiere. It was well-received by the audience, as were the flanking orchestral works by Holst (A Fugal Overture; Country Song and Marching Song; and St Paul’s Suite), sensitively played by Regency Sinfonia.

Disaster nearly struck the second half of the concert when the mezzo-soprano soloist for Mozart’s Requiem, Serena Kay, unfortunately had to drop out at the last minute because of illness. A worthy replacement was found, however, in Juliet Curnow. Juliet, together with Hannah Davey (soprano), Edward Rimmer (tenor) and Nicholas Perfect (bass) produced delightful performances, their voices blending well together. Requiem is always a demanding work for the choir, with consecutive choruses requiring huge reserves of stamina. Charlton Kings Choral Society showed that they were well up to the challenge, singing with confidence and energy throughout. As always, the Regency Sinfonia provided excellent support. John Wright describes it as one of the best performances of Mozart’s Requiem he has ever conducted, and the large audience was clearly very appreciative.

The concert given by Charlton Kings Choral Society at Pittville Pump Room on 25th May was acclaimed as one of our best, certainly in recent years. A good-sized audience gave an enthusiastic reception to Haydn Nelson Mass and Handel Coronation Anthems. The four soloists (Fiona Hammacott, soprano; Victoria Jess, mezzo-soprano; Nick Drew, tenor; and David Smith, bass) were excellent and, as ever, there was wonderful support from Regency Sinfonia, who also performed Boyce Symphony No 5 in D and Handel Arrival of the Queen of Sheba. In the lovely surroundings of the Pump Room, it was a night to remember.

The May 2018 concert, which was held in St Andrew’s Church, Montpellier, was devoted to the composer John Rutter. Works performed were A Sprig of Thyme, his settings of folksongs, and ‘Requiem‘. The soloist was Hannah Davey.

The centenary of the end of the First World War in 2018 was marked by CKCS with a concert of remembrance. CKCS Concert poster Nov 2018. The following works were performed by the choir:  Vaughan Williams – Let us now praise famous men; Parry – I was glad; Ireland – Greater love hath no man; Blatchley – For the fallen; Holst – New Year Chorus (a very early work by Holst, written while still in his teens); Holst – Turn back, O man; Faure – Requiem.

Accompanying the concert was an exhibition about the part played in the First World War by relatives of members of the choir ( CKCS REMEMBERS ). 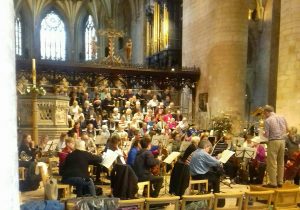 Our 60th anniversary concert in Tewkesbury Abbey was a big success: after the months of rehearsals, the choir enjoyed singing with the exciting orchestral accompaniment provided by the Regency Sinfonia, which really brought the rousing choruses to life. Our soloists Hannah Davey, Serena Kay, Edward Rimmer and, especially, baritone Benedict Nelson, performed brilliantly, and the whole experience was enjoyed by a sizeable audience in the Abbey. 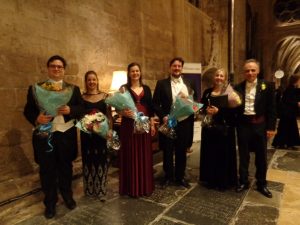 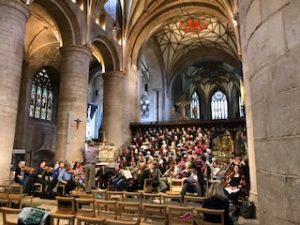 The December concert took place in the Pitville Pump Room. CKCS was supported by Regency Sinfonia.

Although Buxtehude is known primarily for his organ music he also composed over 120 vocal works, and Das neugeborne Kindelein (The new-born little child) is a short cantata for choir and string orchestra which sets four verses of text from the late 16th century celebrating the new-born Jesus and the coming of a new church year. It is very pleasant Baroque music in which Buxtehude achieves an excellent balance between his vocal and instrumental writing.

Ralph Vaughan Williams loved Christmas music and composed examples of it throughout his long life. The First Nowell, written in 1958, was the very last work that he wrote. It is in effect a nativity play, containing parts for several speakers in addition to two soloists, choir and orchestra. However, in CKCS we had a very special reason for wishing to perform this work: it was the mother of one of our choir members who wrote the words for the spoken parts of the work! At our concert, soloists were Helen Wright (soprano) and Melvin Brown (baritone) and speakers included several pupils from St Edward’s School.

The  list of  Past Concerts performed by Charlton Kings Choral Society is as complete as we can make it. If anyone can help us fill the missing information, especially for the early years, please contact us via the website.